De La Salle University professor and local pop-culture provocateur Isagani Cruz offered “biographical evidence” that Jose Rizal is gay: Rizal, based on Rizalist columnist Ambeth Ocampo’s claim, did not sire the unborn child of his wife Josephine Bracken. In fact, it was believed that the couple hardly shared a bed. His second reason is that Rizal refused to marry his supposedly European girlfriend Nelly Boustead, with the lame excuse that he was Catholic and she was protestant. Quite obviously, Rizal was never a firm Catholic believer. In his own writings from letters to books, Rizal also never wrote nor insinuated about sexual act, nor have the knowledge of it. And last, Rizal went along well with many of his male friends.

There have been strong contentions about the possibility that Rizal was gay. But I would like to propose, first of all, as main reason for this disagreement is about the generally negative historical view of people about gay people: that they are some sort of mutants, deprived, sexually deviants, among others. Gays are on the opposite of “normal” or generally accepted “regular-ness” of being human (Garcia, 1996).

Basically, there was the strong belief that being gay is simply wrong.

But for me, it is never wrong to be gay.

Assuming that gay is normal, that it is positive, and just is, then, I believe, it is in fact true that Jose Rizal is gay. One indication for me that he is gay is his penchant for details – decorative details about homes, and his being (supposedly) a “metrosexual” – described as “new breed of straight, urban young men who unhesitatingly drowned their bodies in raucous cologne, who obsessed about their body hair, who spent an enormous amount of time and money shopping for chic, upscale clothing, and who were not afraid to be confused with gay men,” (Queenan, through Flores, 2005, P2).

Real men, however, may not be so explicit about the things they like and share them in extensive writing as much as many gay columnists, art, or design critics would. Which Rizal did. The tendency with gay people is to express their experiences and observations about things, as one may observe inside Philippine beauty parlors, the haunt of homosexuals. One would hardly hear details about the contents of a home (Ocampo, 2005) inside a barbershop, where talks would mostly be about politics, sports, local events (Buswell, 2018). Never the detailed decorations of a home as Rizal would discuss in his letters. Some masculine men indeed talk about vintage or technical items, or describe them, but necessarily for identification or recommendatory purposes, hardly in passing as the way Rizal and many prolific design writers would.

Rizal is gay, so what?

As I was reiterating that the COVID agenda is already discernible over IMF's COVID fund which is set to roll until 2025.
IMF presentation:
"The IMF in its presentation estimates that LOW-INCOME COUNTRIES WILL REQUIRE ABOUT $200 billion UNTIL 2025 TO SET THEIR RESPONSE TO THE PANDEMIC, and a further $250 billion to catch up with advanced economies. An additional $100 billion will be needed if risks identified in the baseline scenario materialize. Meeting these needs will require a coordinated, multifaceted, strong response."
https://nairametrics.com/.../covid-19-imf-discloses.../
That is very clear, and that is why the variants narrative is also meant to prolong this purported pandemic. Absolutely why governments are unreasonable with lockdowns and quarantines as it is meant to suppress economic activities, and further bury nations from foreign debts. One sure way to address resistance is to strip the people of financial independence and make them dependent on their government. Precisely the admin have already breached the 11 trillion national debt from 9 trillion in the same month of 2020, and Duque is again justifying lockdown and quarantines by merely assuming that Delta variant would cause surge on infection.
https://m.facebook.com/story.php?story_fbid=131269445859063&id=100069280233776
This country is already hostaged by the WHO's international guidelines, and will never result to independent means in addressing this purported pandemic. As we can see DOH and FDA are giving peer reviewed and effective alternative drugs a hard time, just so they can prolong this SCAMDEMIC! Our government is even blatant in disregarding constitutional provisions. As the president bragged that he wouldn't follow the law and even warned lower courts of impasse concerning Gov. Gwen Garcia's constitutional stance.
Great number of our countrymen remain oblivious of our predicament, and how our government is committed to the globalists' push for their great reset or the one world government. As this nation being signatory to the SDG/UN Agenda 2030 and Paris agreement, just like other weaker nations, is being compelled to give up its sovereignty for the new world order. Our government officials and politicians have already betrayed us, and will soon surrender our sovereignty to the UN, as all nation States are required to do so.
GISING Juan Dela Cruz!! As citizens of so many nations are now vehemently resisting this medical tyranny towards the globalists' one world government!

More than a year After the Plandemic

In March 2015, after Bill Gates bought the Global Alliance for Vaccine Initiative, virus scare had been started in several efforts - EBOLA, SARS, and by October 2019, the Covid. Bill Gates created more noise as the laboratory people mutate a virus they would soon associate with - of all clean animals - bats! 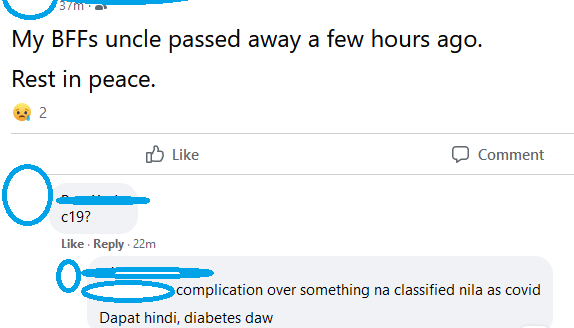 Gates was rallying for governments (yes, governments, for mass purchase!) to get ready for his "outbreak" - because he has spent so much for depopulation (by the way folks, the Bill & Melinda Gates Foundation sponsored the RH Bill campaign to stick the deadly and banned Depo Provera to our 4Ps mothers!) already, he is ready for the next level! The 2019 plandemic!

And now that were there already (more than a year of lockdowns, hype, and a lot more!), here's what Ms. Grace Kelly wants the Department of Health to disclose:

What People have the right to know:
1. How often should updates be given?
2. What should be included in these reports? (Nos. of people vaccinated who got reactions, from mild to adverse, separated by proper classifications like brands etc.)
3. Updates as to who should be removed from the lists of taking the vaccines.
4. Of those already vaccinated, sub-classified as to 1st or 2nd dose already, how many tested positive afterwards?
Plus further infos like:
A. What degree of covid manifestations are typical or experienced?
B. How many were hospitalized (even after vaccination) plus detailed reports.
C. How many died after vaccination plus details.
Isn't the DOH supposed to provide transparency and unsullied information to provide the people a basis for a proper choice since this is a HEALTH issue – their health. Details like brand, nos. of shots given, patients who should be given vaccination and other important data should be made public.
Furthermore and most importantly, this "pandemic" should not be addressed by vaccines alone, all measures should be exhausted. Other medical alternatives as well as other means/measures/ways to resolve it since lockdowns seem to not work given that after 2 weeks of quarantine, the numbers have continued rising. Thus, this problem seems to be even getting worse.
Yes, this is a worldwide issue, we cannot deny that. But this is also really a very difficult task requiring not just government effort but public cooperation – But how could the public cooperate without knowing the whys of it – too much is being hidden from them. Moreover, why are some people excused from protocols, glorified when going into the loopholes to hinder better health services, perhaps enriching themselves from this pandemic. Then isn’t it only right for people to speak up, inform and ask for the truth because those who represent our government are there to "serve" the people by informing them and not by misleading them.
***
We should also note that despite the hype, and the mass hysteria Secretary Francisco Duque III, and his cohorts at AITF had been drumming up for more than a year now, here's the actual statistics, but let's focus on the deaths, which is a very negligible 1.72:

Meanwhile, GAVI has reached the Philippine Statistics Authority already, so that in its recent report, these are the leading cause of deaths in the Philippines stating "COVID19 VIRUS not identified", whatever its place in the plandemic means: 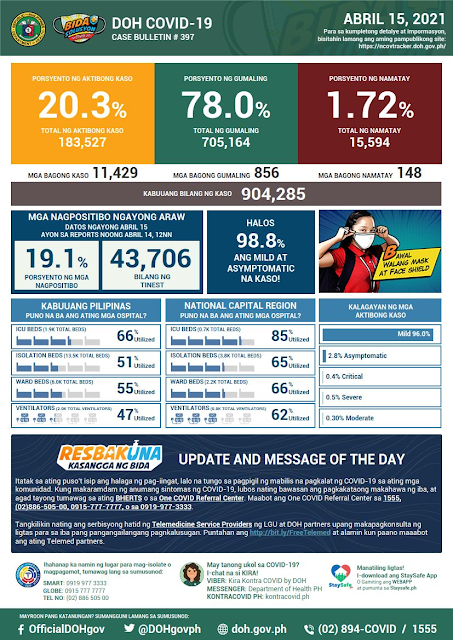 Note the claim and observation of PSA: "Meanwhile, deaths due to pneumonia had the biggest decline, with -24.3 thousand less deaths in 2020 than its average in the past five years." 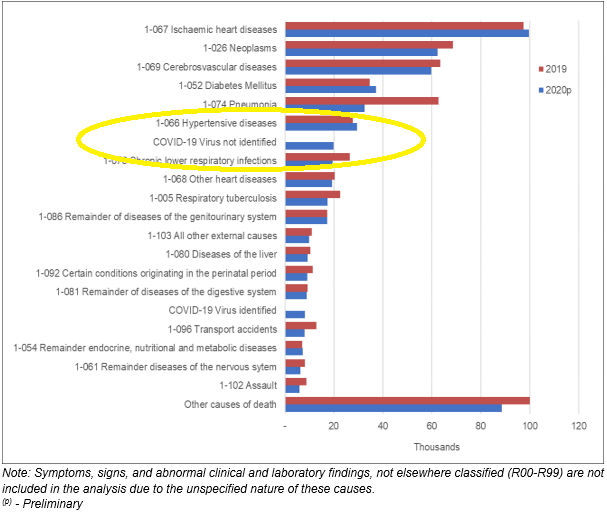 Seriously? The deaths were listed under Covid19! Surprisingly, the heart disease, neoplasm, and cardiovascular diseases weren't listed as cvodi19 deaths yet! Because we all have been expecting that. Yet, these are not considered health scares as compared to the 1.76 rate c19 deaths!

So, whether or not our government people would straighten up and stop treating us like themselves, remains to be seen. What is not funny is letting the blind fools lead us.

More Doubts for the Covid19 Vaccine

In the history of vaccines, the longest vaccine testing (from research to distribution) took 49 years to develop before being introduced to the public. The shortest is the mumps vaccine which started trials in '63 and was introduced in '67 or a total of 4 years. Now they want this Covid19 vax to be released in about a year via what they call "warp speed"? It's unforgivably insane that they are playing with the lives of people.
In the US, they have opted for dropping entirely Phase 2 of the trials (3-phased) and even more dangerous is the possibility that they might forego of or discontinue Phase 3 as well because Phase 3 won't be concluded in time for elections.
Right now, even while Phase 3 is being conducted, they are already manufacturing in their factories those vaccines. Why? because the US government has authorized them to do so which means that should the vax fail, those pharmaceutical companies wouldn't be liable. (Source: https://www.historyofvaccines.org/content/articles/vaccine-development-testing-and-regulation)
Now, how does the introduction of a vax in the US affect us here?
Once the US embraces the vaccine, the rest or most of the world is most likely to follow suit and join the Kardashian band wagon. Those left behind will be considered irresponsible and will be made to feel guilty, unscientific, and labeled as conspiracy theorists. By the way, i am a conspiracy theorist and i am proud to be one.
Sabi nga ni Clint Eastwood “There's a rebel lying deep in my soul. Anytime anybody tells me the trend is such and such, I go the opposite direction. I hate the idea of trends. I hate imitation; I have a reverence for individuality.”
Special Mention to the responses of Dr.
Francisco Salcedo Cruz
below, very informative. He is an MD, MPH and Public Health Vaccination and good governance expert trained by WHO DR. CIRO DE CUADROS AND JICA WPRO ISAO ARITA. 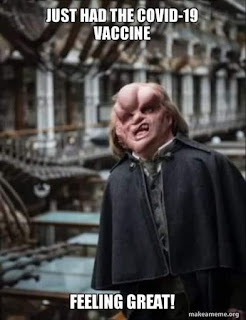