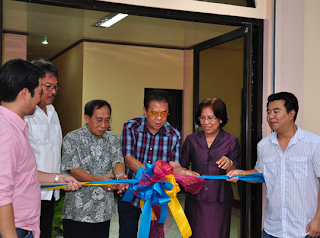 Posted by true blood ilokana at 8:31 PM No comments: 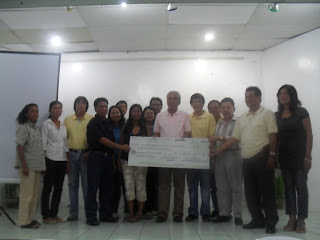 Recently, the Turod Multi-Purpose Cooperative (TMPC) of Cabugao, Ilocos Sur had received the amount of Php 150,000 for their swine fattening project. The said project was funded by Department of Agriculture-Regional Office under the Livelihood Enhancement for Agricultural Development (LEAD) 2000 Phase II program.

The concept of the program is a roll-over scheme because it aims to benefit all the members of the cooperative who wanted to acquire the said livelihood program. The capital borrowed through the cooperative is payable within 2 years, which gives enough time for the recipient to gain some profit in order to have his/her own capital.

Likewise, technical support and assistance were continuously provided by DA-LGU of Cabugao in order to maintain and assure the success of the project. ###

Posted by true blood ilokana at 7:54 PM No comments: 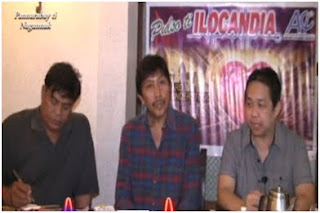 (L-R: Piomar Reoliquio, host, Ben Pacris, panelist, and City Councilor Franz Ranches, Jr, guest)
On the appearance of Vigan City Councilor Honorable Franz Ranches, Jr in Pulso ti Ilocandia, he valiantly strewed all the public issues and concerns asked from him. Without reservation, he stated that their “word war” with City Councilor George Villanueva was rooted from several issues due to individual contradiction of ideas. One of which, was related to the resignation of Councilor Jun Figuerres. Another reason was regarded to the 46 million City Convention Center project. He clarified that their invitation to the project contractor and city engineer to attend their session was natural and very basic regarding of a very important project. He emphasized that they just wanted to have an update about the program of works of the project as preparation for the coming allocation of budget this October. And to explain the alleged issues for not following some of the construction procedures in order to avoid confusion by the public and the media. And he was very vocal to exhibit his disappointment for the twice “no show” response of the people involved. Nonetheless, he said that the explanation of the city government engineer was acceptable and valid because that they did not secure permission from the City Mayor to attend the sessions. While he said that as far as he knew the project contractors have no response at all, even a single phone call.
With regards to his support to Congressman Ryan Singson in his candidacy on the special election, he said that it was a personal endorsement and not from the Liberal Party where he is affiliated. He boldly told that he supported Cong. Singson because of his exemplary leadership and good standing while serving as City Vice Mayor. Likewise, he vocally admitted that he applied for a national position with his aim to serve the people at large. But while waiting for the result of his application, he said that he is contented serving as Councilor. And he assured that if ever it will happen, he is ready to face off the challenges.
Councilor Ranches dynamically envisioned Vigan as a place with total human development. A place not only livable but also a place wherein the people have the freedom to talk, freedom to earn a living, freedom from poverty, and freedom from ignorance.
As from the Liberal Party, he also informed the public that they are forming the “Young Liberal of Ilocos” which is open to all young blood citizens of Ilocos Sur but must be a qualified voter, and aged 18-35years old.
Councilor Ranches was a Political Science graduate of the University of Santo Tomas. He was a three termed City Vice Mayor of Vigan. At present, he is a city councilor and holds the Committee on Information and Communication Technology of the Sangguniang Panglungsod. He is also a district chairman of the Liberal Party.

Posted by true blood ilokana at 8:50 PM No comments: 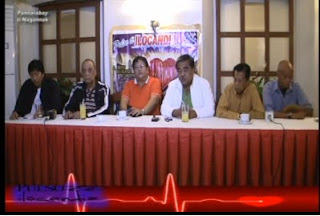 Recently, three agencies have exposed to Pulso ti Ilocandia the importance and contribution of multi-million projects on energy, water and agricultural facilities in the economic growth of the province of Ilocos Sur. The keynote sources of information were Engr. George Yorobi, Technical Consultant of Gorban Industry Philippines, Engr. Santiago Gorospe, Jr, Manager of National Irrigation Administration, 1st District and Engr. Felipe Mateo, Consultant of Tomato Paste Plant.
Engr. Yorobi tackled the “waste energy project,” of the Department of Energy (DOE), which he made mention as the prime reason of his presence in Ilocos Sur. He said that he is “eyeing” the potential of the province particularly Metro Vigan for the implementation of this very good project under the Clean Air Act of 1999. The holistic view of the said project is to convert biodegradable waste materials into energy in order to lower the cost of electricity in the Philippines. He described the project as cheap source of energy, environment-friendly and the solution to widespread waste problem in the country. The benefits derived from the plant also includes methane which can be collected for Liquefied Petroleum Gas (LPG), hydrogen gas, which can be used as fuel for hydrogen cars and asphalt which can be used to improve farm-to market roads. He also revealed that they push through the implementation of the project because it has significant effect on the economic progress of the province. However, in order for this project to be realized it must meet the most important requirement. Yorobi said that the project needs at least 80 tons of garbage per day to make it operational and sustainable.
“Addatan ta danum, rumbeng laeng nga aywanantayo…” said Engr. Gorospe as he detailed the highlights of the 2.4 multi-billion Banaoang Pump Irrigation System project in Ilocos Sur. He clarified that the said project started its operation since last year. Gorospe told to Pulso that in the project plan it targeted to provide service to 7000 hectares of agricultural lands. But, at present it has irrigated 5,200 hectares of farmlands. He added that the project will be expanded to accomplish its lacking target area. Said project covers agricultural lands from the 1st district towns of the province: Bantay, Vigan, San Ildefonso, Santo Domingo, Caoayan, San Vicente and Magsingal, which primary aim to enhance productivity and boost the income of farmers.
On the other hand, Engr. Mateo construed that tomato production is a good source of income for farmers. In order to encourage the farmers to plant tomato they have implemented a program extending assistance from planting up to the transport of the products in the plant. They have also imposed reasonable price of the product which is Php 2.50/ kilo. And an incentive of additional 20 centavos per kilo will be given if the farmer produces 50 tons of tomato per hectare. #
Posted by true blood ilokana at 8:33 PM No comments: