Mario A. Albalos Library: The Ilocano Pride Has Arrived

Cabaroan is made up of two barangays in eastern Vigan near the borders of Caoayan.  What makes Cabaroan special today is its unveiling of a humanitarian project funded by a native of the barangay who has migrated to the US  - Jenny Alcausin, a nurse.

This significant project elevates not only the entire ka-Ilocoan but also concretized the elusive ideal that every moneyed Ilocano should aspire for - returning the value of literacy back into our much degraded Philippine society.

The Mario A. Albalos Library or Biblioteka Ni Ayat. 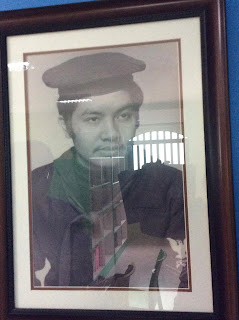 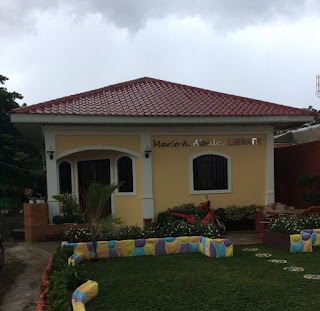 The facade of the one-storey building library. 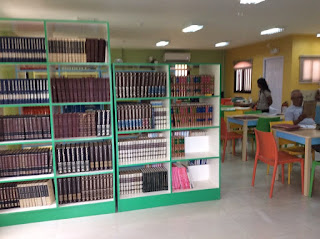 Upon entry, one is greeted with the cheerful bookshelves, tables and chairs. 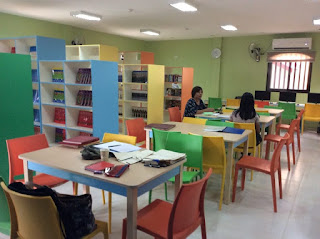 The  line of colorful tables and chairs... and at the foreground are - yes - new computer sets connected online! 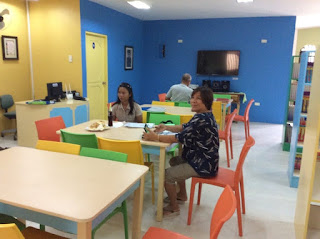 The library has its own wall-mounted flat-screen television, too!

The first question that comes to mind is why Ms. Jenny Alcausin sponsored this project?
The answer might be more than what ordinary mortals might grasp, but then, we can always speculate: I'd say Ms. Alcausin is enlightened. And we can always add a lot more reasons.

This unveiling of project is hoped by GUMIL officers who visited it today to open the floodgates of parading Ilocano's egos and pride in a substantial manner, beyond large houses or latest four-wheel-drive craze, that are soon abandoned by their balikbayan owners, and a lot more means of stating that "Yes, I have arrived."

But who is Mario A. Albalos?
The late Albalos is also a native of Cabaroan, one of its most studious students, one of the most prolific Bannaoag and other early  publications writers, who soon migrated to the US to become a US Navy. His hard work and leadership skills were made known not ony for the heaps of awards he received in his naval duties, but more so among his peers who called him "Mr. Make it Happen." After leaving the navy, he became so involved in community works in Hawaii that garnered him the Thomas Jefferson Award in 1979. He is bigger than life itself, as his works will soon be displayed and rediscovered by everyone who will visit the library.
Posted by Margaret T at 2:31 AM 2 comments:

The Ilocos Norte Provincial Jail informed that indeed, one ARSENIO CORTEZ was detained September 10, 1964 for kidnapping and slight illegal detention and had been out on bail in October 7, 1964. No update or action has been taken by the Vigan NBI.

Several reports to Ilocos Sur media members have been circulating for years about the malicious exploits of one Arsenio Cortez, apparently owner of Iluko Heritage Channel 16, a small cable channel located in Bantay, Ilocos Sur.

According to media sources who recommended female workers to IHC16, on-the-job female trainees of mass communication and related fields, as well as aspiring broadcasters that worked with the cable tv channel have experienced humiliation when they worked with Cortez as they always ended up being physically and verbally ill-treated. Most of them have claimed to have been offered to establish "romantic" relations with the septuagenarian whom colleagues estimate to be already 78-year-old.

"Minaniac na pay diay kaanakan ni Misis na," (He even maliciously touched the niece of her wife) a reliable source privy to what are happening in "news coverage" trips and office work at IHC16 said.  "Ginammatan na kano diay maselan nga parte ti bagi na idi naminsan a napanda nag-coverage," (Cortez grabbed the crotch of the girl when they are on the way to or from a news coverage) the source said. "The girl was crying in anger and humiliation when she narrated her ordeal to me," the source added.


Another media man who knew Cortez from way back said that he can recall Cortez had been incarcerated in Ilocos Norte for an alleged case when an amateur singer contestant filed criminal complaints against Cortez several years back.

Many of Cortez' victims are afraid to speak up and come out in the open because he owns the cable channel that is partly-funded by the Provincial Governemnt of Ilocos Sur, an insider said. Apparently, PGIS is subsidizing some ninety-thousand pesos (P90,000) monthly in IHC costs and expenses.  But insiders also said that although it has been airing for about 8 years, employees who have been there for years are never regularized, receive very minimal income, and might not even have employee benefits required by the Social Security System and Department of Labor. It was even suggested by another reliable source that Cortez avoids paying his taxes by using old official receipts.

People who are concerned are requesting Provincial Governor Ryan Luis Singson, NBI Vigan chief  Atty. Lacson B. Malqued, the SSS, and the Dole to investigate the matter so as not to stigmatize other Ilocos Sur media members and PGIS itself.

Before I posted this, I already filed a police report at the Bantay Police precinct about commission of Sexual Harassment (at Work) against me by this Arsenio Cortez as well as requested for investigation on my testimony and complaint with the NBI and currently held by Investigator Edwin Fianza.

Section 3 of the Act specifies that:

The police, sadly, a relative and fellow female as well as her colleagues at Bantay, have not been briefed or aware of this law, nor its implication and where it is coming from. They insist on the factor of it being more brutal experience - of possible rape or forced physical contact rather than the economic, professional, mental and emotional impact it causes, which I understand were the reasons why this law was made in the first place.

I am a solo parent, gearing up for college education of my 3 children, so, getting clients (as I am building up my consultancy client-base) is very important at this stage. Considering that I am ancient and still become prey to this kind of cheap gimmick by this Cortez is a very negative experience. And I am calling out all those who have knowledge or had bad experience with Cortez to come out.