Cabugao, Ilocos Sur – Last September 16, a short program commemorating the 117th birthday of the late General Eustaquio Baclig was held at 7 am at Barangay Baclig hall, which was named in his honor.
As a tradition, flower offering was laid on his monument located just beside the Municipal Hall. The highlight of the celebration was a mass officiated by Fr. Mario Baclig, the grandson of the general.
Fr. Baclig narrated a short story about the greatness and bravery of the late general. He then encouraged the audience to emulate the good examples imparted by his grandfather. The priest also added to continue the legacy and keep the spirit of nationalism, service and loyalty alive.
The event was attended by several municipal official and residents of the said Barangay. Its success was due to the concerted effort of the Barangay officials headed by Punong Barangay Ely Savella
Posted by true blood ilokana at 7:11 PM No comments:

Email ThisBlogThis!Share to TwitterShare to FacebookShare to Pinterest
ISAVE continues their green advocacy 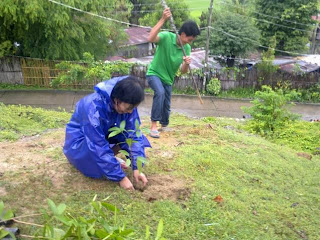 ISAVE in action! On photo were Ivy Campos (in blue rain coat) and Ryan Paet (in green shirt)

Sta Maria Ilocos Sur - Finally, last September 17, 2011, the Lingkod Alay sa Kalikasang Ating Dakila (LAKAD) Part 3 was successfully conducted after it was reschedule because of typhoon Mina last August. The tree planting activity was held at the UNESCO heritage site of the Parish church of Sta. Maria de Assunta, of said municipality.
This time, only 5 alumni members of Ilocos Students as Vanguards of the Environment (ISAVE) have joined the said activity. They were Christopher Valmoja, Llamier Iloreta, Ivy Campos, Ryan Paet and Regimar Balcobero.
Campos said during an encounter, that despite of their number, the tree planting activity still turned out to be successful wherein they managed to plant 100 mahogany seedlings. “… We’re only five, but, despite that we were not disappointed and still continue the activity since we were already in the site. We understand our fellow ISAVEs who were not able to come because of some priorities…”
The first two part of the leg was both held in Salcedo, Ilocos Sur last June of the same year. The ISAVE aimed to plant more trees in order to protect and preserve Mother Nature.

Posted by true blood ilokana at 7:05 PM No comments:

Email ThisBlogThis!Share to TwitterShare to FacebookShare to Pinterest
NTA Conducts Consultation and Massive IEC with Farmers 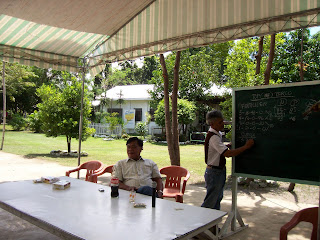 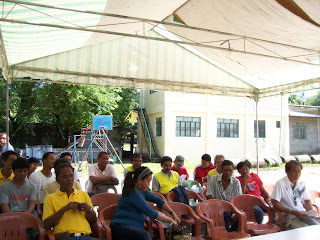 The participants and even the NTA officials listen attentively during the sharing of Former Mayor Benjamin Sarmiento.

Sto. Domingo, Ilocos Sur – Due to the declining numbers of tobacco farmers in said municipality, the National Tobacco Administration (NTA) conducted a consultation and information education campaign regarding tobacco production.
“…Panagpasubli ti panagmula ti tabako…” Minerva Mizal, branch manager of the NTA Vigan emphasized as the main aim of the said campaign. She encouraged the farmers to reconsider planting tobacco because aside from the provision of a new technology, production assistance extended by the agency and the partner trader/buyer firms, she assured that tobacco is the crop that can give them higher income.
In order to inspire the farmers, Benjamin Sarmiento, formers San Juan Mayor and National President of Federated Tobacco Farmers’ Association, shared their tobacco production experiences in his own hometown which has now 600+ hectares for tobacco planting. He added that because of tobacco planting, their town share for RA 7171 has increased to 55 million this year. It is an open book, that the previous town shares have been used for the improvement of their infrastructures such as the new municipal hall and new public market. Aside from economic improvement in his town, he also boasted that the living condition of individual tobacco farmers have been uplifted because of tobacco farming.
Likewise, Jose Taclas, NTA Technician, discussed to the farmers the new improved tobacco variety or the so called “TOP Tobacco”. The advantage of this is its guaranteed higher yield due to the use of hybrid variety such as NC-2326, K326, PBO-3, and PBH-2295. Aside from high nicotine content which is more than 2%, these varieties were also identified to be resistant from drought and attacks of insects. The TOP requires a desired distance 1.2 by .5 meters for each plant. As recommended, in 1ha, the ideal number of seedlings to be planted is exactly 16,666 only. This allows the plant to grow at maximum and avoid nutrient competition. Based on their calculation, this will provide an average yield of 2,600 kg for the farmers. It is also recommended to remove the top layer leaf in order to have the desired number of leaves which ranges from 12-16 only. The use of fertilizer was also based on the recommended quantity of the agency and the buying firm in order to attain highest quality of tobacco. He also advised the farmers to choose only those fertilizers/pesticides that are yellow or green labeled and avoid the red label ones because these have high toxicity which is both harmful to human and the environment.
After the discussion, an open forum consultation was also conducted to allow farmers to air their issues and concerns on tobacco production. The farmers frankly admitted that they lost interest in planting tobacco because they were stymied with the low buying price wherein they cannot gain back their high production cost. Another was the lack of technical and financial assistance from concerned agencies.
As an address to these problems, Mizal said that the agency through the collaboration of several buying/trading firms was extending assistance to all the tobacco farmers in the province. However, they can only avail the said assistance through farmer’s cooperative or association. The assistance will include financial assistance for the production costs and construction of curing barn. The agency will also extend technical assistance such as soil analysis, and periodic visitation during the production. Another concern that has been noted in this Municipality has been that funds for RA 7171 were used for infrastructure projects such as the so-called “night market” currently used as parking space for tricycles, seen as nothing to do with farmers.

Posted by true blood ilokana at 6:32 PM No comments: